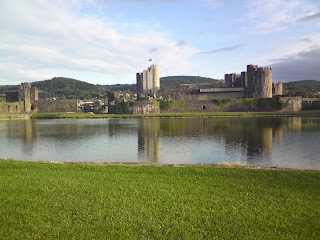 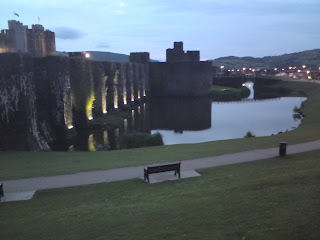 I cannot get the water to heat and I am not sure what I am doing wrong. I text the previous owners but they are not interested as they didn’t text back. I will have to find a caravan repair shop in Wales and get it looked at or my dreams of wild camping are stuffed. Either that or become a grubby and stink…..ick!! Saying that I did manage to wash my hair over a sink today….well couldn’t let Pete see me a mess…. a girl has standards you know.

Pete and his mate Marcus arrived in the morning and it was lovely to finally make friends in the flesh with my phone-pal. We spent many hours chatting by phone after being introduced by Steve and I’m just so glad Pete is as fab as I imagined, although I had him older and darker in my head! Funny how you get an impression of folks over the phone. Apparently he read the blog and stated that I sound tired due to the spelling mistakes. So for the record, whenever there are blatant spelling errors from now on, assume I’m deeply tired (thanks Pete).

After we drank freshly ground strong coffee and talked macho biker conversation, something I haven’t done in a few years and had forgotten I loved (passionate male energy), the lads left and there didn’t seem much point staying, I tried to pay and leave but there was no-one around, so I left voicemail to send a cheque and drove away. I wonder how often people lose money this way. As I am a decent sort I will post it to them, but it does seems a bit lacksidaisical. How do you spell that?

So off to Caerphilly, to Jess’s pub and a beautiful castle. I am in the quiet room inside as Jess feels it will be better than the car park. I am inclined to agree as it's dreadful and on a busy roundabout, but only after the pub shuts. I’m old enough and love quiet, early nights and easy mornings. I admire Jess though as this is a bit of a Coach Carter situation. The locals are a tough lot.

Tomorrow the castle… I can’t wait…..

God, I am definitely too old and too sensitive to sleep on a mattress on the floor in a so called quiet room. Two in the morning the noise abated enough for me to enter deep sleep so consequently I am pooped. However that being said, I’m excited about the castle. Last night I sat in the bar with Fin on my lap and wondered when I could politely leave. Fin sat for a few hours being his most attractive lovely self and wagging his tail at everyone who passed by, then after a bit he just stuck his nose in the crook of my arm and hid. Hmmm, he and I are so symbiotic, that’s exactly how I felt. We took our leave.

The castle is spectacular and at just over £7 for both, not too expensive to visit. The Marquees of Bute was a fabulous bloke. He restored this amazing spectacle to some semblance of glory in the '30's. He even knocked down buildings that belonged to him as they obscured the view, now that’s passion.

We spent a few hours going around and Jess was sweet to watch as she soaked up some heritage. I love ‘wow’ factors and we certainly got some of those. We imagined being 4 foot something tall and after walking up and down all the tiny spiral staircases knowing how hard it would be to work in a place like that. I only have size 5’s and I wondered how scary it must be to try to do them in heeuge modern size 11 pluses. Now that is brave. The rest of Caerphilly can be ignored, but the castle is defo a place to visit.

It is so nice to spend some surrogate mummy time with Ebony’s friends. We used to spend large amounts of time having ‘sex, drugs and rock ‘n’ roll’ chats when the girls were little. Ebony would come home with a crowd as they knew I’d tell them the truth. If you are old enough to ask a question, I reckon you are old enough to hear the answer, and it still goes on. Now when they are adults, it’s more like mates, but a ‘don’t forget how fabulous you are’ hug is always welcome, whatever your age. I’m impressed with Jess and the job she is doing. I shall watch where she takes her dream to own the best live venue in Caerphilly closely.

Wow time flies and I must away.

I have no idea when I can place these words on the blog as the signal for my dongle is variable. Sometimes my poor addled brain is slow to cotton on to tekki stuff. I am just putting the words down as a word doc, and placing it on the blog as and when I can.

I have advice to go to the waterfalls of Ysrafellte (don’t ask me to pronounce it) and then onto Brecon to camp. I’m googling caravan repairs to try to get the boiler sorted on the way, I can’t do grubby and made the most of the shower here before I leave.

It’s been lovely spending time, but to away into the unknown….

The unknown took me to a waterfall called Sgwd yr Eird (don't even dream of a translation). I turned off the road and traveled down a road to a car park that was going to cost £4 to park and had signs everywhere that ‘thieves operate in this car park’. Hmmm…..A motorhome this size carries with it an unspoken ' I carry all my wordly goods on board'.I drove around and saw piles of broken glass on the ground where thieves certainly had been operating and left.

I have no idea why Ysrafeltre, (pronounced Isravelter I found out) is so nice as when I drove past it didn’t even wink and entice me in. I ended up in Brecon soon after as I missed the turn off for the camp site. Well, when I say camp site. I believe a CL has to have water and a toilet dump perhaps, and this did, but was just a sort of meadow, a pull in to the side of the road, not even a field. I’m glad it had a tap as Fin decided to do a role in something green and sticky session and, oh boy did he do a good job.

Doreen who runs the CL was intrigued by me and the Hobby. I could do a good caricature of her if I drew a picture. Imagine rounded farmers wife, curled hair, in her sixties, pink T shirt and tight leggings tucked into her wellies, glasses and as nosey as hell. I took a place of guard at the door as I knew she would be inside in a flash. She had one of those squintey eyed things going on and I could see her mind going ten to the dozen as she looked over my shoulder trying to . Folks seem to be fascinated by me doing this on my own. That's actually more about them than it is about me, as they could not imagine being the ‘girl’ on her own. I’m starting to like it.

Most interesting things I learned today- I get 26.3 miles per gallon, but I do have half a tank of water and a full tank of fuel so I didn’t expect the projected 28. Oh…..and don’t walk in a meadow at this time of year in sandals, as small wee slugs commit suicide between your toes.

Things that made me smile- Fin trying to walk in the meadow when the grass was twice his height and having to jump instead. I swear I could hear doink doink doink as he did it! Also on the way here I got lost in a small town, but god don’t say that to the locals, they get a little miffed. Anyhoo, on asking directions a friendly Welshman got all puffed up and started to flirt (well, he’s not made of wood) and was fascinated about me and motorhome…can you see the running theme? He gave me directions and asked me if I was married, then asked did I want to be. I laughed and he said he’d been married three times. I thought ‘Yeah? So? What’s wrong with that?’. He said ‘The first wife died from eating poisonous mushrooms, the second from strangulation, as she wouldn’t eat the mushrooms…!’ I’m a sucker for a man who makes me laugh, but this one was in his sixties and had wild ginger eyebrows, so I carried on laughing as I drove away………..