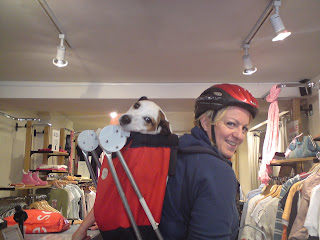 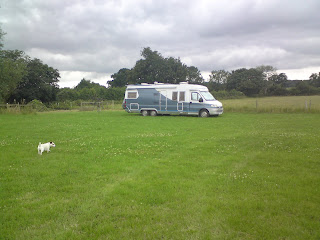 I never thought that we might ever get here.
In 1998 a dream was hatched and while on a motorcycle holiday in France I stated that I would travel the world in a motorhome. Twelve years later Finbar Saunders, my fabulous Jack Russell and I are on the first leg.
In the next three months we are to travel the UK in my Hobby motorhome with bicycle, roller blades and snorkeling kit. (I have also brought along my ski boots as I need to find out if my knee can ski after a hefty surgery).
The Hobby is a 26 footer, with permanent bed and toilet/shower room at one end, a kitchen area in the middle and great sofa and dining area at the drivers cab end. I love it. I had it weighed beofer coming away and in total it was 3.7 tonnes, which meant I have nearly a tonne of stowage...room enough for roller blades!
Week one started on the evening of Monday 19th July we set off. Fin (to his mates) sitting in the passenger seat with a harness. Being a left hand drive vehicle has not been hard for me to get my head around as I used to fly around in ambulances at one time in life. You just have to be aware of your corners and as the Hobby has amazing mirrors set up to see all of them I am able to see everything. First stop was 60 miles away in Willand to see my Dad and his wife. I have made a vow to sleep in the Hobby every night as I love it and I tend not to sleep well in strange beds. I was parked on the road outside and didn't wake up until 0840 when a school brat went past and shouted!
Night two was with Leanda, an old mate from school in Hinton Charterhouse just up the road. The next morning we went out for coffee and I got stung by a wasp, bloody thing may have lost it's arse end in my arm but it hurt in a truly brutal way and I've has a big red blotch for my sins ever since.
Night three with Maggs in Bathford, again very close by. It's so lovely to catch old mates that I may not have seen for a decade or more in some cases. Having no time agenda is a total blessing. Maggs was fab and her new man lovely. Loads of luck to them as they get a house together for the first time.
Night four I went to see Biggles and his wife Ian who I really haven't seen for a decade, though after 20 minutes it felt like just six months. They live in a lock keepers cottage near Chippenham, with the end of the canal and lock at the end of the garden. I had a great time catching up and reminiscing. Ian was my instructor when I went to training school for the ambulance service 21 years ago and his mischievous nature still drives him even now. I am definitely going back for another installment on the way home, but may not drink so much wine this time!!
Night five, six and seven are in a field just outside of Malmesbury in a Caravan Club Certified Location or CL. It has no electricity, loo or TV signal. Internet is intermittent. It's uber quiet and next to Foxley Road Garden centre, who's mad spaniel and Fin have made friends and spend time giggling, running round in circles chasing each other. I have stayed still for a couple of days as Pete who has been a phone buddy for a year after a sort of intro by my bike mate Steve (who got in the police dog section this week..Woohoo for you mate), is at work. We met briefly for five minutes nearby and are going for a bike ride tomorrow..yeah baby!!
So after a week of travelling, what have I learned?
That the gas for the fridge works if you press the button in for a minute to let the pilot light catch. I had to throw out loads of food before I sussed that one.... doh!
That lino in a motorhome needs a special tape to hold it in place over rounded edges. All that was holding the lino near the cab was dilute icky sticky goo!!! Thanks to the carpet man in Chippenham for advice and proper tape. I win the lino fixer of the week award.
That emptying the toilet cassette is a 'bogging' job. Fortunately a no poo rule makes it a smidge nicer that horrendous. Wild camping and wild pooing for me lads!
Sleeping head down makes your lungs fill with fluid if you are travelling with a mild chest infection.
Forgeting essentials like a prescription with three months supplies on it is really dumb. Good job that I have just phoned Deb an old friend and can get it sent to the Lakes.
Fin is very cute in his ebay-special baby rucksack and get loads of attention. He loves it and gets very excited about it. Nine kilos is a lot for me to carry on my wonky back by bicycle and he has boney elbows, but it means we can get into shops and Abbeys and the like with no questions asked.
So week one nearly over.
Week two moves to Wales where on Monday I stay in a pub car park near Caerphilly, can't wait.
Posted by Su Carlson at 10:35