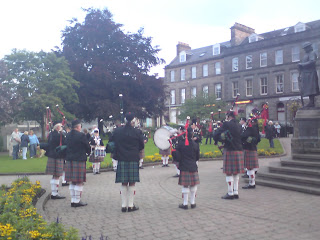 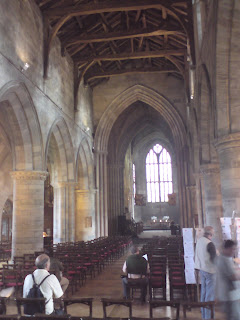 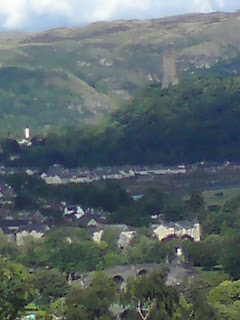 Well the pipers were splendid as they walked down the high street with police escort, playing Pride of Scotland. They got to the park gates where people of Blairgowrie were stood in anticipation and just stopped, put down there pipes and sauntered in. All very strange, thought I. They then congregated around the first world war memorial and picked their pipes back up and played three tunes, stopped again for ten minutes and had a fag break, before playing another three. I enjoyed it a great deal and laughed my head off when Fin decided to join in, almost in tune with the wailing pipes. Folk near by thought it great sport. After that I wandered over to the pub, looked in the window to see two old soaks at the bar and no obvious music set up and thought ‘Sod it’ and left. Back in the Hobby I had a cup of tea and got ready for sleep, which came easily and surprisingly, even though a huge lorry carrying trees ready for milling, parked up next to me, I managed quality sleep. Early in the morning buses came past, but I ignored them and carried on. It didn’t make up for the deficit, but helped.

I was lost for somewhere to go. I didn’t know whether to go to Lunan Bay or go south. I went south after remembering something the helpful ‘ti’ assistant told me when I asked her ‘What does Blairgowrie have to offer?’, ‘Nothing’ was the reply. It is only good for a base to start from. I filled up my water container from the garage which sells the cheapest fuel in Scotland so far at £1.14 a litre, so while I was there I filled up the fuel tank as well.

I got to Stirling and drove past the massive Wallace memorial. Its actually better observed from the car park of Stirling castle, which I decided not to go in, rather walk the perimeter on the ‘back walk’, a footpath that circles the wall. It was most interesting and allowed me to see the 306 degree view of the countryside around and particularly the view of the old bridge that Wallace fought for with the memorial behind it. This castle is where the Scottish royals ruled from. Mary Queen of Scotts served her time here and prayed in the Church of Rude near by. It is a dark, austere building outside, like something out of a Tim Burton movie. It has a feeling of a cathedral inside and I enjoyed it very much, especially as carrying Fin around in my arms was permitted. (Chester cathedral listen up!) The stained glass was stunning and as the sun shone for a while, burning off the low cloud that dogged most of the day. I just love looking up through to the knave from the back of these buildings. This one has been used since the 13thC and is therefore one of the oldest churches with continuous use in the UK.

I walked Fin some more, past the Old Jailhouse, where ghost walks take place most evenings until I came upon the shopping centre and not being interested, I turned back and sat in the sunshine outside a wee bistro and had some splendid coffee. I had a conversation with Bob who told me that he and Carly had made it to Lunan Bay and she was booked on a fishing boat with fishermen who haul in nets full of wild salmon on Monday. ‘Book me on that boat’ I urged. So I back track this evening and go slightly north to a car park on Lunan Bay, a long sandy bay on the Dundee coastline, where I shall relax and catch some sleep and some salmon. It will take me a few hours to get there, but it feels like I am going on holiday. How odd! Must get a bucket and spade….