Castles, Dukes and More Pipers Than You Can Shake a Hairy Haggis At! 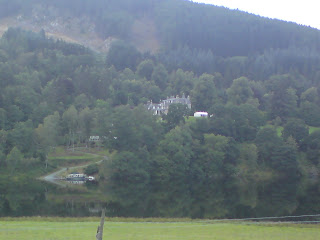 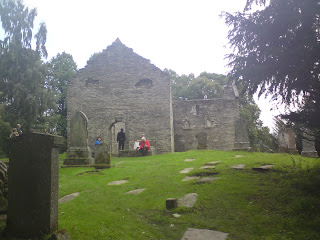 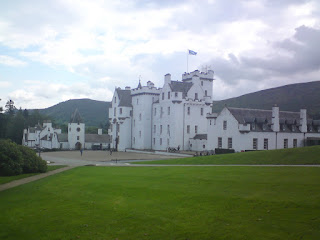 I am a mercat. Every little noise wakens me and I see every hour. I cannot keep doing this as it is affecting my health, I might use some earplugs, as to be honest I am perfectly safe. I mean, even though I was watching the Queens Gaff, no burly men in crisp suits came and took my camera or bino’s from me. I am hyper sensitive and it is uber quiet, so even a snail sneezing is massive out here. My back is very sore and I really need a massage. I rub some of my oils in and prepare for the day.

I remove the blinds and the vista is the same and I feel blessed. I spend a little time just watching the wake of a duck, then put the kettle on and put Fin out for his morning constitutional. I don’t leave the door open though as the wee beasties have got word that we are here.

While the boiler is heating up water for a shower I change my bedding. It is a horrid job for me due to the awkwardness of the position of the bed. It should be simple until you realise that I have to take everything off the bed and place it on the sofa, then strip the bedding. Easy so far. Then putting a sheet on is bending and twisty and I need the agility of a five year old and the strength of a wrestler. Because the bad is a double and I have come from the world of King its all a bit big and I have got into a habit of folding covers under themselves to make it fit. I love having a nice boudoir and my leg wax lady Wendy told me she suffers from Su bed envy as mine always looked so nice and well dressed before. She shares her world with her son in a one bed flat and she has a sofa bed in the lounge. I understand her life more now.

I still insist on Egyptian cotton sheets and got some for a fabulous price from Asda (£9 for a fitted double sheet) before I left. I have always had a five foot bed before now so it's taken a little bit of getting used to. Since I have been in the Hobby I have used a hand made American quilt to top it off, my favourite cousin Philip and his wife gave me a hundred years ago. Now some would say that it is a total fag to do this every day, particularly with my whinging about my back, but when I walk into my adult wendy house, I see my nicely made bed and feel I’m home. I cannot afford to live untidily now or I would soon slide into chaos and that would make me feel dreadful, so being ordered normally is a godsend.

So that done and painkillers taken I drive to Blair castle and enter a long drive where a horse trial is in session in the grounds. The castle is painted white and a piper is playing outside. He is part of the privilege the duke was awarded by Queen Victoria as he is part of the Atholl Highlanders, though he looks like he should have been retired some time ago. Non the less I am getting a piper so I am not complaining. Thought the castles history goes a long way back most of the architecture that I saw inside is 18thC, though as you already know I am rather partial to that period, so I was almost blown away by one of the ceilings that is an awesome example of Georgian plaster mouldings. I stayed in that room for longer than any of the others, but because I cannot look up for long without holding my head, I either needed to lie down or have a tall bloke stand behind me to lean on. I enjoyed the castle immensely and it cost £8.75 for a really nice day. After the tour of numbered rooms and a drawling conversation with a lady from Carolina about the four poster beds and some exquisite embroidery of the bed dressings, today’s theme, I leave the house and its memorabilia of times past and roam the gardens with Fin, who has patiently waited for me in the Hobby. I have two choices. I can walk the perimeter or enter the walled garden that was restored by the 10th Duke, who was responsible for the castle and its grounds being available to the public. I did both of course and Fin and I had a lovely wander.

Swans and their offspring stood next to the red and green Chinese bridge that cross the small lake, in the walled garden and apple trees spread their branches along the walls loaded with fruit. It had a small house in the middle of the east wall where ladies could sit out of the heat, so as not to get colour. I liked it here and my phone rang and I had a conversation with Deb and the day was filled with joy. She joined me for the walk around the rest of the grounds on a hunt for statues and ornaments. The tallest tree in the grounds until a storm blew its top off in March was a fir and it stood 63 metres. I’m glad it was away from me or I would have definitely had to lie down to see its top. Now the tallest is a Douglas fir standing at only 59 metres. A church ruin houses all the dead Atholl family except the last Duke, the 10th, who was buried elsewhere. He was well respected by the community by the look of it. I hope the 11th is the same.

I had a really nice time, probably helped by the amusing conversation Deb and I had that made me laugh a lot and promises of more when I stay with her.

I leave and drive the narrow twisty road to Blairgowrie. I get there at 4.30 pm and park in the free car park in the center of town. I have been given this info by the wildcamping website and according to the very helpful young lady in the ‘ti’ I can stay there forever, as long as I inform the police via her, to say my vehicle is not abandoned. It is going to be the opposite of last night I fear, in that it is noisy, being on the bus route and near the main road. However, it is near the square where a pipe band is playing tonight and after that an acoustic band is playing in the pub over the road and they are dog friendly…woohoo!!!

So as I write this I am drinking a cup of earl grey and eating mini popodums with mango chutney and then I’m going to heat up the left over chick pea curry and eat it with the sag aloo I just got in Tesco, then I’m off for a wee bit of tartan treasure. Wish me luck!