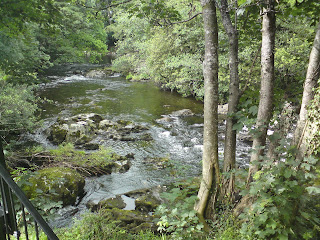 Good gracious, I woke at ten. Well, strictly speaking, seven, as my dear friend Andy had a Skype chat from France. I leave Skype running as a back page on my phone. I love it, as it’s free and even if you have to call an international number it’s a small cost compared to mobile or landline. So a bleary few minutes and I was back in slumber. I am deeply deficit in sleep and for months before this I just worked too hard, until I fell of the perch with a stress related something. Anyhoo, that is over and I am obviously finding the space, peace and quiet and opportunity to catch up. Loving it too.

So what to do today? I sat and figured out that I didn’t want to go too far so Betws-y-Coed looked favourite and I need to sort out my emergency lighting after the headlamp I bought didn’t work –at three in the morning, when the leisure battery so ‘no’. My Caravan Club book said there was only one site there and when I phoned them was told it would cost £17.50 a night and I couldn’t have a pitch until Sunday. ‘Sod off’ to that!

I rang a farmer who has a field for £5 a night and said I wanted two nights at, Trawsfynydd. I drove straight past the turn off looking at the gorgeous lake and ended up on the Coed road anyway so went for a visit that lasted a few hours. I got a replacement head lamp, some cycling shorts and a pretty girly top…get me! Fin and I hadn’t eaten today so at 4pm sat in a café next to the waterfalls by the bridge in the middle of town and had a special of fish, chips, mushy peas and a cuppa for £6- perfection. Filling up on lard by a beautiful setting is my kind of happiness, shame the coffee was pants. Afterwards we went for a quick walk by the river and got back to the Hobby to make our way back to the site. I passed all the car parks on the way to the bit of road I parked on for free just at the end of town, really just to see if the Hobby might fit any of them, which of course it doesn’t. It was only a few more hundred feet to the free road side parking that I wondered why more folks hadn’t parked there.

I stopped in the pouring rain at Blaenau Ffestiniog on the way back, to check out parking and prices for the train to Porthmadog and was mighty pleased to see long parking spaces by the wall next to the road. I’m on a winner for tomorrow then, pershticough, pershticough. (that’s the noise a steam train makes for all of you raising your eyebrows and scratching heads )

Oh and best of all I got to shower again this morning. The lovely folks who sold me the Hobby thankfully got in touch last night and went through firing up the boiler with me on the phone. The only thing we could come up with that was different from them using it to me is that the cowl on the gas vent outside is different. I removed it and hey presto, hot water and blissful me. There is a caravan shop near the railway station in Porthmadog too, so I shall call in and get one that has more holes in it. Happy days, I am now completely independent. Now, if this flippin rain would stop I might be able to get power in the leisure batteries and grind some coffee beans.

I reverse into a parking space with an older couple watching from their motorhome. I didn’t worry about the audience, grateful for the reversing camera fitted. I could not do this without it. I just cannot see behind me or my rear corners and with it the whole world is here. I can also keep an eye on motorcyclists and let them know that I know they are there and make it safer for them to overtake. It’s the gracious thing to do. As a biker it is always worrying that the numpty in front may not have seen you and starts to speed up as you put yourself in the danger zone. I stop and have a chat with them. It’s a club owning a motorhome and they turn out to be Mick and Betty from Barnsley. Mick told me that he had done his own conversion and I thought that it would be just like any other home conversion I had seen over the years. I was gobsmacked as Mick opened the door of his ‘Yorkshire Rose’ beauty. He had it painted on the side. Betty told me he made it all for her. It was better than most professional jobs I had seen. He was a sparky by trade but his cabinet making skills were exquisite. Betty told me that he had got her to sit in the toilet area at the back of the van so that she had enough room to sit in comfort. That’s true love that is! I paid £21 for both Fin and I and got on the train with the couple who met 20 odd years ago and are now in their seventies. They go to auctions all over the country collecting Mechano and sell it on e-bay. I loved their company. They were funny and interesting. Most of the train journey is about the nostalgia of sitting in a carriage that doesn’t stop rocking and rolling and listening to the steam engine. The little carriages are mostly Victorian and are fun just to sit in. The scenery is lost in the foliage of the massively tall pines along the way and the rain obscuring a lot of the rest, but Betty and Mick’s anecdotes made it fun anyway.

At Porthmadog we went on our way and Fin and I went in search of a decent coffee. God, what a hole. This is a dismal place to visit with more depressing rows of sad shop fronts with not a decent place in sight . I found the caravan store but they were unable to help me as they 'didn't deal in Europeans@. I did pass one bistro/deli, but Fin would not have been welcome. Wales is breathtaking and yet the little towns and villages are dilapidated and in need of a face lift. I was hungry and bought some fruit from a store, wanting something more substantial that was not take-out as I'd had chips yesterday, but unable to find it, so made my way back to the train station and found Betty and Mick already there with the same mind as mine. We passed some more time before getting on the return train. I explained to them about this blog and Betty asked if I was putting down what was my head, ‘your thoughts like?’ I told her that would be way to scary for all concerned, and said that I am writing a journal for that as well as this.

Back at our start point I said goodbye and was grateful for having spent the day with the company of nice folks. I needed to spend some time with some interesting company and had received it. Better than the journey to the valley when I got held up at the head of a traffic snarl on the side of a mountain. We sat there for about 15 minutes and while I watched a guy in a road side digger read his newspaper, I sat and ate some fruit, then after a bit got up and went to the on-board loo, even contemplated making coffee, but just knew that the guy would get out and turn his lollipop from red to green if I did that.

I decided last night that you can stuff spontaneity. It’s exhausting and takes up way more energy than having a loose-ish plan, so this morning over breakfast I wrote down the weeks left and where I want to be in them and it felt good to have a small amount of control. I felt so much better.

Today I decided to go to Anglesey and to a little place near Holyhead called Llanfaethlu and would get there the long way round. I eventually transpose the directions given from the other direction and arrive at a farm and find a man to talk to. He doesn’t have a Welsh accent and I ask him about himself and it turns out he is related to my girls…. BIZZARRO!! He is their fathers cousin and his mum came to the wedding. I’m stuck in a parallel dimension for a bit, where there is no oxygen. After a while I can feel my vision coming back from it’s blurred state and my breathing returns to normal. I know the world is small but I’m in the back of beyond and this guy is doing up the farmhouse…..the world moves in mysterious ways indeed! What will the days to come bring?

Oh yes.. the scenery on the way here is spectacular and to be honest has been completely forgotten by meeting with a piece of my past… bizarre indeed!

What have I learned? Don't ask strange men their surname if you have even the slightest niggle you already know the answer, in case it comes true!