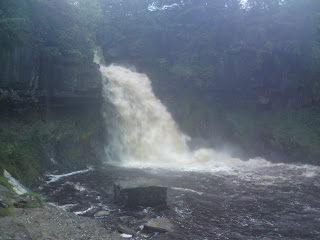 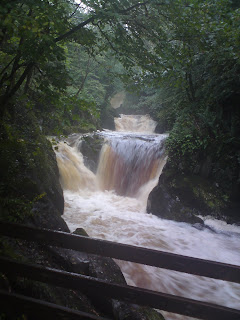 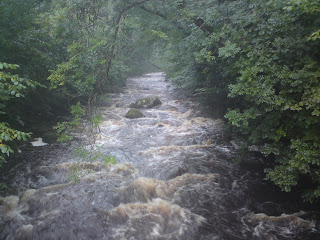 Deb finds that her new beau is arriving later in the day and we get the morning together and exchange music from one computer to another. I bought a little speaker for my netbook after seeing one at Deb’s. It’s fab, fits in the palm of my hand and only cost £15 from e-bay. I have new music to enjoy and I look forward to my new music system. I prepare the Hobby for it’s journey and we get some nice things in for lunch.

When the man arrives he is noisy and obviously a bit nervous. I watch and enjoy the subtlety of new love. It’s sweet and I like him, he is real. Deb and I exchange knowing glances to each other sizing him up. Poor chap, I’d be as nervous as hell if I were in his shoes.

I say a weeping goodbye to my lovely mate and drive away, grateful as hell at having this opportunity to share and be so loved. We laughed at each other as we have arranged to spend Tuesday evening together on a ski slope in Manchester, but the only way to honour the time spent is to be emotional. I have never spent so much time with another woman and got on so well. It is by admission like living with myself but I am still amazed at the ease at which ten days has passed.

I make my way to Ingleton Falls in Yorkshire, about half an hour down the road. It is late in the day and the man at the paying counter tells me that the gate will be shut on one side. I secretly decide to wild camp in the car park and be on my way early. It is raining and a couple who have just finished show up dressed from head to foot in wet weather gear. We caht for a couple of minutes about the route and I get on my way. I am wearing gortex, but half way around realise that it need re-proofing as I am wet inside too. The rain is heavy but does not spoil this for me. I came here a hundred years ago with Albert when her lived in the lakes. I honour him in my walk. The walk is made up of walking up a valley with one river, walking over the top of the moor to another valley for the trip down to the village again. The river is torrential and bulging. It is brown from the peat and angry, boiling in places like molten lava. Gouging out the rock as it descends down the valley it has forged for itself. I am full of whoah’s, wow’s and Oh my’s. The ferocity of the this river is a little scary and I watch Fin carefully making sure he doesn’t get too close to the edge. This is spectacular. I am wet as I get to the top and get an image of American Werewolf in London. Don’t stray off the path Su. I believe that if I had I would have been lost in less than a minute. It’s pea soup up on the moor at the top. I laugh to myself as I say in my head ‘Eeh, don’t thee stray off t’path’, not quite the same as the Devon accent from the film. Still we are not in the Slaughtered Lamb and it’s not dark..yet!

The descent is not nearly as dramatic. The crashing falls are not so obvious and I don’t come upon anything with a shocking eye opening sudden stop like on the way up. Never the less it’s pretty dramatic, if only for the amount of water moving. Pooh sticks is not an option here.

I walk across the river on a open weave metal bridge. Fin stops half way across and looks down at the water. I wonder what he is thinking. I am reminded of a river I crossed on a metal bridge with the girls in Canada, watching a river we had contemplated white water rafting on. It was in full flood after record snow falls and we watched full trees being sucked under by the torrent like a twig. This wasn’t quite to this standard being a much smaller river, but I wouldn’t have wanted to get in it. I wouldn’t stand a chance. Fin is soaked and so am I. We trudge down the concrete steps built alongside the river. The sign said it was a walk not suitable for disabled folk and gave it a strenuous label. Well, that is probably true. I felt my legs being beasted in places and it certainly put me through my paces and tested out my knee. I wouldn’t say it was strenuous, more difficult and steep in places, I was puffing, but not so that I had to stop at any point. Perhaps I am fitter than I realise! I wondered how far the silly girl in pumps and white jeans got. I had passed her and her man at the start. I was in approach shoes and wearing appropriate clothing for the trip, even if it let the water in eventually. It took me two of the advertised two and a half hours. I would have taken longer if the weather had not been so foul. I would not like to have been the silly girl, even if she had stopped half way she still had to go back down.

It cost me £4.50 to park. The path is well trod and must cost to upkeep and to keep it safe. I decided to park up for the night as the views I had planned on seeing on the way to the campsite would be lost in this weather. I moved the Hobby out of view of the road and prepared dinner. I made a lovely risotto with two king scallops tenderly cooked in garlic butter perched on top and sat amongst my dripping clothes. When I climbed into bed the noise of the river was a little like being in an interrogation room with white noise being played in the background. Due to the steepness of the walk my neck has kicked in and the tinnitus that comes with it starts up. At one point in the night it rained even heavier and it overrode the rivers noise and tinitus and I slept. The rest of the time I couldn’t. I would have told you anything at one point, just please turn off the white noise.