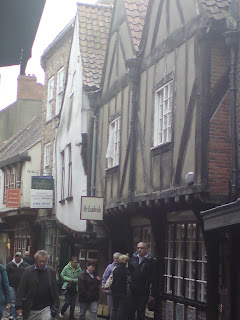 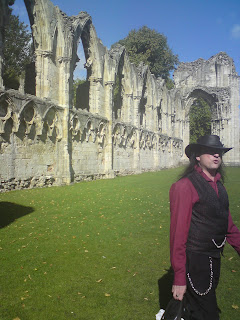 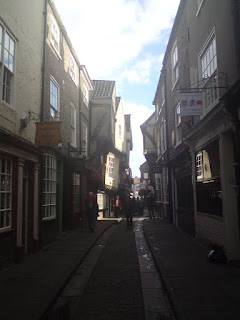 I awake to sunshine, linger over a cup of tea and write up the blog which has become sadly neglected while visiting Deb. I am guilty as charged, but kept my journal each night and so I am able to reflect easily. I realise that I have not got as many photos as I would like and remember that I asked Deb to take some on her phone as I had forgotten mine one day. I must ask her to email them to me.

York is splendid. Fin and I arrive by park and ride and make my way purely by accident to a gateway where the walking guides meet. I had read about this in the Rough Guide to Britain. I am pleased to be met by a middle aged Goth with long black hair. He told me he could not take me as I was singular and his insurance would not cover him. I resigned to going on the Jewish tour when, as if by magic two Australians and an American appeared and we were on. For the next three hours we all walked the streets including those that appear in Harry Potter movies. I was chuffed to recognise them as any true Harry fan would be. He was a very interesting guide with masses of English wit that went over the head of the foreign English speakers. I heard so many dates and went through so many ages I was dizzy with it all. I had wanted to walk the wall and at one point we went through the ancient Scottish knocking gate, where the visiting Scots had to knock for entry. Up on the wall was a sign ‘no dogs’, here we go I thought. I pick Fin up as we went onto the wall and carry him for a short way, before he becomes too heavy. We see ruined abbeys, ancient streets that are as wonkey as the buildings that line them, little alleyways known locally as snickleways and small sculpts that adorn the buildings corners, each with a story and history attached. It was worth every penny of the £5 I paid and I was so glad to have done it. I was left expectant for tomorrow when I will go without Fin and go into the massive Minster and see it in its glorious internal wonder.

When I get back to the empty car park I get into the Hobby and start looking for a site near to York. I find one quickly and drive only a few miles out of the city to a nice little farm site and decide to stay for two nights as the Goth has recommended a coffee house on the river that sells a pot of hot milk, flakes of chocolate to crumble into it and cream to load on top. Sounds like a heavenly way to end a day of sightseeing. I can’t wait until tomorrow.