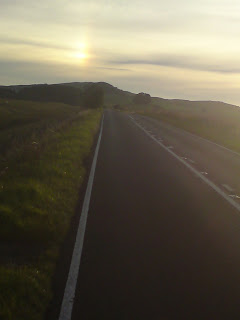 Today we part company and head south to our separate destinations. We agreed to leave en convoy to Hadrian’s wall, have a look at it and go our ways from there. On one hand I was sad to leave these lovely, easy to be with, giving folks. On the other I had been static for long enough and it was time to go. We got packed and made out way off the site and got onto the main road out of there.

It seemed to take forever to get around Edinburgh. I had decided that I didn’t want to go in and visit it, it could keep for another time. Eventually we found our way out of the ring road and onto the A68 and made our way to Northumbria. Before getting there we passed through Jedburgh where an abbey sat on a small incline opposite a fish and chip shop. I had suggested that we stop for something to eat, as by three in the afternoon, we had not eaten and I was starving. So, eventually I found palatable fish and chips in Scotland. I could now leave.

I saw a sign for the border of Scotland and England as Carly rang me and told me that they were not going to stop at the wall after all and would make their way down towards home and do the wall another time. I cursed as I drove past the turning for the layby and missed a great spot to say goodbye from. Later I mentioned it to Bob and he didn’t even notice it. I reckoned that it was a fabulous view point from the top of the summit where the view point was would be spectacular, overlooking both Scotland and England in one fell swoop. I was annoyed with myself.

We stopped later on down the road and said our heartfelt goodbyes with promises to meet again. I do hope so. The road is like a roller coaster and we have all squealed all the way down on every steep up and down, blind summit after blind summit. It was so much fun if I could have turned around, I’d have done it again, again and again….Yeeharr!!

I turned right and drove along the wall. At one point I stopped to look at a fort and found a mound of earth and a picture of what it used to look like. I drove on. A few miles of ridges of where the wall used to live, I came upon a car park where Housteads Fort is set back from the road. Fin and I jumped out and walked half a mile from the car park down the hill and back up the other side to a site run by English Heritage, who charge to enter the fort. I walked round it and had just as much an opportunity to experience it from the periphery as from the inside. Some of the civilian living accommodation were outside the main fortress and could be accessed without payment. The sun was going down and as I got back in the Hobby to carry on along the wall to Carlisle a vertical prism displayed itself through the clouds. I straight rainbow no less.

Hooray, I arrive at Deb’s and crash for the night. It’s a mighty long way down to hers and I am as always shattered. It’s a recurring problem on this trip and I need to stop so desperately its stupid.